Kenya Jones has proved to be quite good in many capacities in her four years with the Georgia Tech women’s tennis team. One of the things at which she’s best is closing things out.

“She has been at Georgia Tech during probably some of our most productive years,” said head coach Rodney Harmon. “She’s been an All-American four times. She’s done a lot for us, not only in terms of winning matches, but just in terms of her being a team captain and helping the other girls understand what the expectation is to be a student-athlete at Georgia Tech, especially in the women’s tennis program, where the expectation is we’re always going to be a top-10, top-15 team in the country.”

Jones closed her academic career with a flourish, last semester recording a 3.6 GPA, helping the team record a 3.49, second amongst all Georgia Tech athletic teams.

“She finished up in style,” Harmon said. “It shows a lot about Kenya but also the way she was raised and about the values her parents instilled in her to be able to handle tough situations and keep moving toward your goal.”

With such success closing, imagine how dissatisfied she was with the way March 2020 played out. The COVID-19 pandemic cost her and her teammates the opportunity to play their final seven ACC matches and postseason and deprived her and classmates Nami Otsuka and Nadia Gizdova the honor of walking across the stage at McCamish Pavilion for commencement.

Jones earned her degree in business (with a concentration in operations supply chain) although she probably won’t get the chance to walk across the stage and shake hands with President Ángel Cabrera. But she may still get the chance to walk up to the net and shake hands with an opponent at NCAA Championships as she’s been granted an opportunity to come back for the 2021 spring season.

It’ll be the chance to close her career, one of the most distinguished in program history, the same way she began it — on her terms.

Jones earned her degree in business, with a concentration in operations supply chain, in May but didn’t get the chance to walk across the stage to receive her diploma.

Convincing Jones to attend college in Atlanta was a coup. She grew up a little more than 200 miles from Nashville and perennial power Vanderbilt, while her mom, Sonia, and dad, Keita, a college tennis player and former tennis coach, were from Mississippi — Ole Miss also hotly recruited her. But she had plenty of reasons.

“I wanted to be close to home, but not too close to home,” said Jones, with a laugh. “But also, I’m a big-city girl, and I really liked the team. When I came on my visit they made me feel like I was already a part of their team. The campus had that big-city, modern feel to it. I just loved everything about it.”

Jones made herself a part of the team right away, going 32-12 in singles, 30-7 in doubles, 25-3 in doubles with Hourigan as a freshman. The duo advanced to the Sweet 16 in NCAAs, upsetting Florida’s 11th-ranked team of Anna Danilina and Ingrid Neel on the way.

For an encore, Jones was 25-10 in singles and 29-10 in doubles, earning all-ACC second-team honors. She and Hourigan entered the NCAA Tournament ranked No. 1 in the country, and reached the quarterfinals of the NCAAs. They helped the Jackets earn the doubles point in 22 of 31 matches on the way to the Final Four.

Jones also would get her first taste of competing at No. 1 singles on April 13, at Pittsburgh.

“Growing up, it was always a dream of mine to go to a really big D-I school, but then it was also a dream of mine to actually hold that No. 1 spot,” she recalled. “Even though I knew I wasn’t going to be playing that spot for the whole year, it felt good to know, ‘Okay, your time is coming.’ It was really cool.”

Harmon, a No. 1 player for SMU who won two Southwest Conference singles championships, was neither surprised at how Jones stepped up that day nor how she’d embrace the responsibility of playing at No. 1 over the next two years.

“She gets that look in her eye that she can put the team on her back,” he said. “She realizes that when you play No. 1, the rest of the team is looking down to see what the score is on your court, how you’re doing and what the body language shows. They look down and see her playing one of the top players in the country and see her in a dogfight and it gives them so much confidence in their match. She realized that she was the leader.”

But she also realized she’d sometimes have to follow.

“If I said, ‘Hey, Kenya, you’re going to play (No.) 2 today,’ she’d be like, ‘Okay,’” he said, with a laugh. “During her junior year she played No. 3 doubles. That’s coming from her sophomore year where she finished No. 1 in the nation in doubles.” 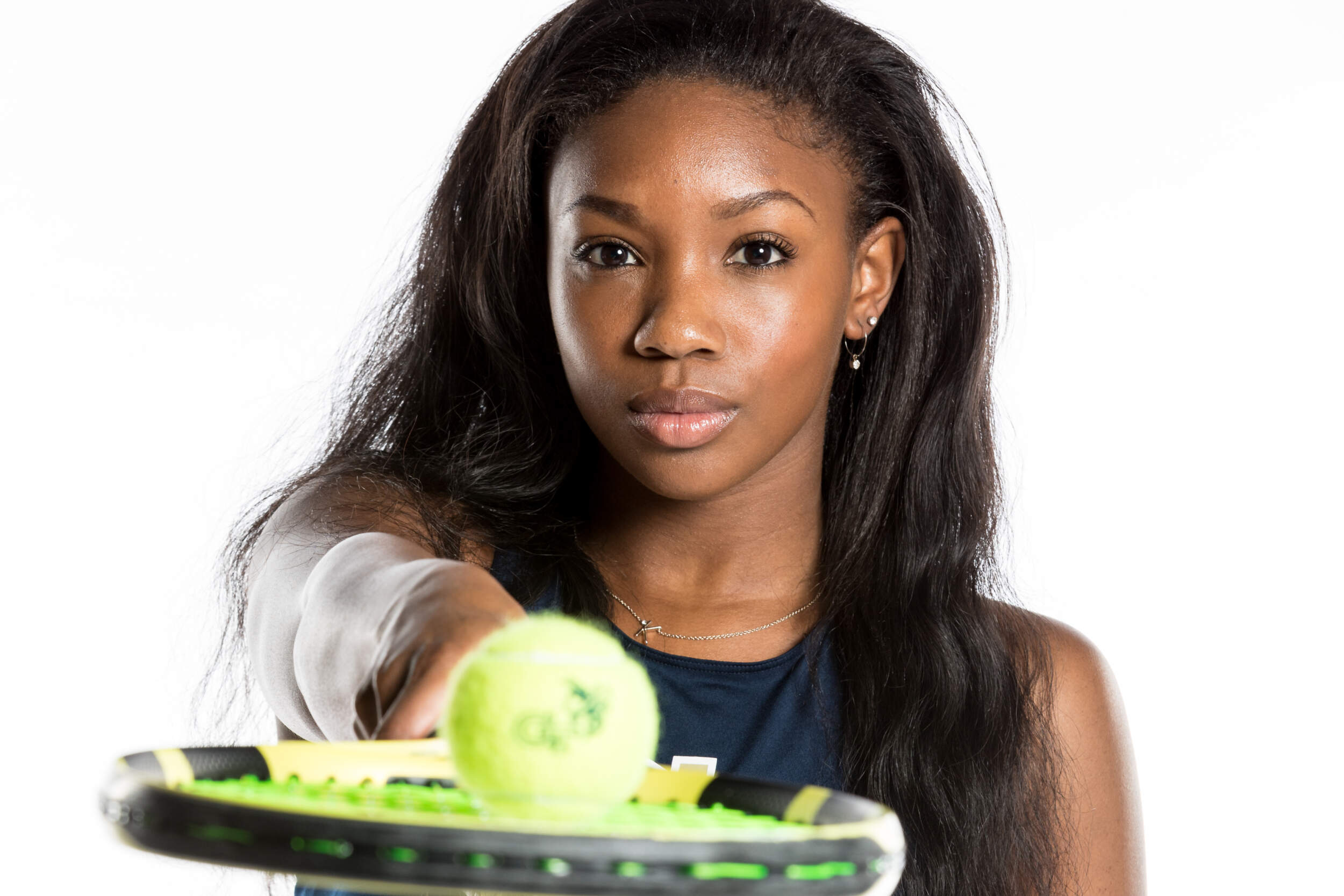 Jones has a chance next spring to become only the second Tech tennis player ever to win more than 100 singles matches and 100 doubles matches.

Getting to play No. 1 singles did make going home and facing her dad and older sister, Kayla, easier — they both played at No. 1 in college — Keita at Jackson State, then Rust College, Kayla at Chattanooga.

Jones earned her first All-America honor following her sophomore year, as she and Hourigan were named. She’d also receive an off-court honor by being chosen a team representative on Georgia Tech’s Student-Athlete Advisory Board.

“I always thought it was really cool because community service holds a special place in my heart. I feel like there can always be more of it,” she said. “SAAB gives us a voice so we could go back to our teammates, talk to them about different situations, get their insight and opinions on it, then come back and relay it to people who ranked high within our athletics program to really get all of our voices heard.”

Not being heard was never an issue with Jones.

“She’s had great ideas,” said Otsuka, also a SAAB rep, along with fellow roommate Victoria Flores. “She wanted to be involved not only in tennis-related stuff, but also in the community and the student-athlete community. I think it’s great that she’s not only focused on her tennis but also working on her networking and being able to make the community of Georgia Tech better.”

Being there for her teammates has and will define Jones’ legacy.

“She comes out to practice every day ready to go, works hard, does the things that we have laid out for that particular day,” said Harmon. “But she also takes the extra time to sit with someone who’s maybe having a tough time or having a tough day, and she spends time with the younger players even though she has other commitments and other things she has to do.”

“She really has grown as a person, as a student, as a player, as a friend. That is what I’m most proud of in her,” said Flores. “Then seeing how that translates to the way she leads our team on the court. She brings it every day to practice. She sets a great example for all of us.”

Jones followed the unforgettable 2018 season by shining brightly at No. 1 singles (going 29-12), and wherever needed at doubles, going 20-13. She earned All-ACC honors and All-America singles honors, ranking as high as No. 8 overall in the country. Several devastating injuries resulted in the Jackets going 13-13, 7-7 in ACC play, but they still advanced to round two in NCAAs, upending No. 25 Ohio State, 4-3. Jones’ 6-0, 6-4 win over Isabelle Boulais began the comeback from an 0-2 deficit.

Finishing 35th overall was disappointing but set up 2020. Determined to finish on a strong note, Jones again led the team from No. 1 singles and teamed with Flores at No. 1 doubles.

Jones spearheaded a team that simply would not accept another season below program expectations. She was 17-9 in singles, while she and Flores were 20-2 in doubles, 6-0 in ACC play. Their .909 win percentage set a program single-season record. The Jackets entered the season unranked but jumped out to an 8-0 start, including knocking off No. 12 Ohio State at ITA National Team Indoor Championships, to crack the top 25. They worked their way up to No. 8 and were on a roll, having won six of seven, when the season was suspended due to the COVID-19 pandemic.

Not coincidentally, Jones also was rolling, riding a 9-2 run, including a win over No. 3 Alexa Graham of top-ranked North Carolina. She also chalked up wins over No. 8 Shiori Fukuda of No. 12 Ohio State and a three-setter over No. 6 Michaela Gordon of top-ranked Stanford, both at ITA National Team Indoors.

She was rewarded with All-America honors in singles and doubles. But there was no closure.

Jones hopes to get that in spring 2021. She plans to jump on the chance to return the Jackets to the Final Four while continuing to scale the program top 10 in singles and doubles wins. Her next doubles win would make her only the second Yellow Jacket to join the “100/100 club” — 100 singles and 100 doubles wins — joining Kristi Miller (152 singles wins, 110 in doubles).

“Wow! I didn’t even know half of those,” she said, with a laugh. “Honestly, I think all of those are pretty amazing. It feels good to be part of such a good program.”

Harmon is excited about one more season with Jones as part of what should be a great program, especially with an incoming freshman class, ranked No. 2 in the nation by Tennis Recruiting Network and Mizuno.

“It’s great that Kenya’s coming back,” he said. “We have four freshmen coming in who are good players, but they’re freshmen. We’re excited. She’s going to help lead our four young ones along with our returners. It’s very special for us.”